Today Sun oficially released JavaFX 1.0. I was really looking forward for this release but I`m really shocked how bad it actually is. This is purely from a user point of view because i haven`t done any development so far.
One of the biggest problems of Java has always been the install experience so I thought they would do it perfect this time but not so. I think I have never experienced a worse install experience as for the new JavaFX. I went to the sample page http://javafx.com/samples/ and selected one of the samples. First there was nothing happening just a blank screen, then machine freeze for about half a minute then nothing. Went back selected a different example – machine freeze and after some minutes i finally got a window telling me i need to install something and that it`s untrusted content WTF. Ok installed JavaFX and thought now it should be all fine. Select a sample again and now they finally load. It takes unbelievable long to load. I always thought the Flex SDK is big but if this is just unbelievable. Ok when the app finally, after some screen flicking loads it`s unbelievable unresponsive. I really expected JavaFX to be blazing fast compared to Flash Player but it`s just sluggish and feels like good old applets.  After that bad experience I wanted to finally see something cool and checked out the more promising examples. First video playback. What`s cool about this is that it can handle flv files! Really nice! But it`s slow. The video playback stutters extremely on my machine (New MacBook Pro). Went on to the next killer feature example. Dragging an mp3 player from the website to the desktop. Well I couldn`t figure out how to do it

The other strange thing is that everytime you scroll a page with an JavaFX applet the applet just disappears.
Seems like they have to disable the applets while scrolling for performance or something but this is just insane.

This really looks like a JFX flame post but it`s all just out of disappointment. I really had high expectations but now they are all gone. I think if you missed the RIA train like SUN did and then take so long for the release you have to make it perfect. Well this is not the perfect release they would have needed IMO.
I really really wanted SUN to succeed with JFX because to me it seemed the only possible alternative to the Flash Platform but seems like I just have to rely on Adobe for a long time (which is not too bad ;-)).

BTW seeing the JavaFX logo and the FlexBuilder logo on my desktop side by side I really hope SUN gets sued for this. It`s just shameless and maybe hints at how innovative they are (not).

Well you know the story –  too much work no time bla bla…
But this time it turned out quite cool. My work at Parleys.com allowed me to combine my private fun with work. For our publisher application we needed some functionality from my new RichFLV app mainly the speed and memory improvements. So I was able to work on it and most of all test it a bit more.
I can not reveal much more before we present the publisher at Devoxx in Antwerp but it looks really cool.
Here is a screenshot that reveals some of the new functionality.

BTW if any of you are going to Devoxx let me know! I always feels a bit lost between all those Java Nerds

As a follow-up to a previous post i`ve posted a feature request for screensharing in the Flash Player/AIR bugbase.
If you like it please make sure to vote: http://bugs.adobe.com/jira/browse/FP-1100

And if you have not done already please also consider voting for this one: http://bugs.adobe.com/jira/browse/FP-5 (byte access for NetStream/Video)

Anyway keep voting – Change is coming! Yes We Can! If we make enough noise we`ll get it 😉

After the really great campaign “Adober, make some noise” by Andre Michelle, Joe Ebert and Kai-Philipp Schöllmann I think it is now time to look at long missed important update to the flash video capabilities.
There are basically two thing that I really miss (for a long time now :-()

1. Accessing raw video data . Accessing the bytes and setting the bytes of a video stream is really needed. Something similar to the new SampleDataEvent and extract methods of the Sound class. I would love to generate and manipulate videos in memory and give the resulting ByteArray directly to the Video object.
Until now I have to load the flv twice, One time to load it as a Byte stream to manipulate the bytes and then another time to play it. There are hundreds of use cases for me. The two most important are: Video editors and dynamic language support for videos.

One post of Tinic Uro makes me confident that they`ll look into this. He said:
“What’s missing? Unfortunately some features did not make it into Flash Player 10: Extracting audio data from a microphone and extracting audio from a NetStream object. We are aware that both features are highly desirable, but for various reasons it was not possible to make this happen in this release.”
Tinic Uro May 14 2008

So yes opening NetStream would be exactly what I need.

2. The second big feature I want in the Flash Player (or only AIR??) would be screen sharing. This is something that currently can exclusively be used by Adobe (see Connect) but is not accessible by the normal developers.
This discussion is going on for years now and I think it`s finally time to come up with a solution. I know that one of the problems is that you need the connect addin but this should be solvable. I mean pacifica will also need an addin so why should this not wotk for screen sharing? Or even if they just enable it for AIR apps only I would be happy.

Any news on these topics would be great!
And if you also think this is a needed feature please vote here: https://bugs.adobe.com/jira/browse/FP-5

What`s this? Benelux leads in Max Milan registrations? What!
Ok ok I know for a long time now that these guys are a bit smarter than us germans but does this have to stay like this? Although I cannot go this time

I encourage everyone who has the chance to do it. Last year was really great and even if you think you know already everything there are so many other reasons to go than just learning. Here are my top 3 reasons:

– Meet the people that actually build the stuff that pay your Bill. This is my biggest point. It´s so cool to talk to the actual brains behind the products I use every day. I`m sure Adobe will ship some engineers from the headquarter over to Milan.

– Meet other cool developers. Last year I met a lot of interesting people that i`m still in touch with and which just broadens your horizon. Something which is espacially important if you`re a freelancer which works on his own most of the time.

– See the really really cool annoucements first. I`ve heard of some very cool stuff they are going to show. Some which might be quite unexpected.

So no excuses – grab Serge Jespers discount code –  convince your boss to get you a ticket and go there!
Especially if you`re not from the Benelux area

Today I got a feature request asking if it would be possible to export flvs without sound. So here it is: 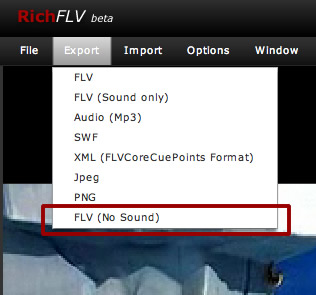 This will just export your flv and remove all available sound tags.
Get the latest RichFLV here.

Again an update to RichFLV with some minor bug fixes.
Grab it here: http://www.richapps.de/?page_id=120

Some good news. While I don`t really work on the current RichFLV version anymore I spend some time to try other (better?) ways to do the flv manipulation. I have a prototype running that will not read all the data in memory. Other than I expected it`s pretty fast and memory consumption is low. Originally memory was no problem for me because RichFLV was meant to cut small flv files (around 50mb) but now I get more and more requests from people who want to cut flv files which are 500mb-1GB big.
So with this new method i was able to cut an flv of 800mb and the memory stayed at 30mb throughout the whole process. So virtually any filesize should be possible. To make a working application out of this I will need to rewrite a lot of the old stuff and this will take some time – which I currently don`t have. So I plan to release a version of it which will have less features but enables you to work with pretty big files. So I would like to hear from you what are your favorite features. Leave a comment and I will try to add the most requersted ones first.

Choose from here:
– cut flv files (this one will obviously be included ;-))
– stitch flv files
– Adding/Manipulating cue points
– extract sound as mp3
– convert to swf
– change the sound track of an imported flv

This year I have a session at Max Milan called “Complex Data Manipulation With Actionscript 3.0”. The title is a bit missleading because rather then showing how complex it is I want to show you how simple it is

In this session I want to cover aspects of working with files and streams in AIR and the Flash Player and take a look into how to manipulate those files by using the ByteArray class.
My current plan goes like this:
Overview of how file manipulation/analyzation is used in the Parleys Publisher/Player.
From there I extract some samples that will be discussed in detail (code).

So my question: Is this stuff interesting for you? What are you missing? What of the above examples interests you most/less? If you`re coming to MAX Milan and if you`re interested in this topic this is your chance to make sure the session will be relevant for you 😉

Sure it`s hard to cover all this in just 50 min but it`s meant to be an inspiring session which gives you an idea of the possibilities and to take away possible fear that this stuff is too difficult – it really isn`t!
If the topic is interesting to you I would love you to register for it!

Anyway I wish you all agreat MAX – and i´ll make sure I use my planned session material for some more blog posts.
Benz

I`ve updated RichFLV to fix a bug that affected a lot of users. So everyone that had problems with importing files that stuck at 100% analyzed should be happy about this release. Go and update here: