With the annoucement of support for h.264 and AAC in the flash player i feel a bit challenged to add support for this in RichFLV too.
I don`t know if it`s even possible to get acceptable results but that`s what i thought with flv first too. As a start i wrote a little program with
AIR that analyses MP4 files and traces out all the atoms it finds with path, position, size and container info.

I`m still learning about the mp4 format. If anyone has good ressources, especially how to extract video frames…
The best ressource i found till now is the quicktime description from apple.

Man these are exiting times. H 264 support in flash player – what else could you ask for. Well i can think of a lot of things but i`m afraid the moment i write it down there is another labs release 😉

I´m back from the Adobe AIR Camp in Dinant (Belgium). It was a really cool event with extremely interested and motivated people.
It was nice to see how quick people were able to build applications even if they had never used AIR before.
Cudos to Serge Jespers from Adobe Beneluxe (The Mike Chambers of Europe ;-)) for putting so much effort into organizing a perfect event – and for inviting me.

If you`re interested you can get the source files of my talk here and the PDF here.
I`ve uploaded some photos to flickr. See them here.

This week i will attend an AIR Summer Camp in belgium.
I will talk about Bits And Bytes with AIR and give some insights to RichFLV and RichMp3.
I`m a bit nervous but also flattered to see my name on an official Adobe document 😉
I`ve prepared a lot of samples and plan to post them along with my presentation later this week.
The Adobe Beneluxe Team seems to do quite a good job in promoting AIR wonder why it`s so quite here in germany ? 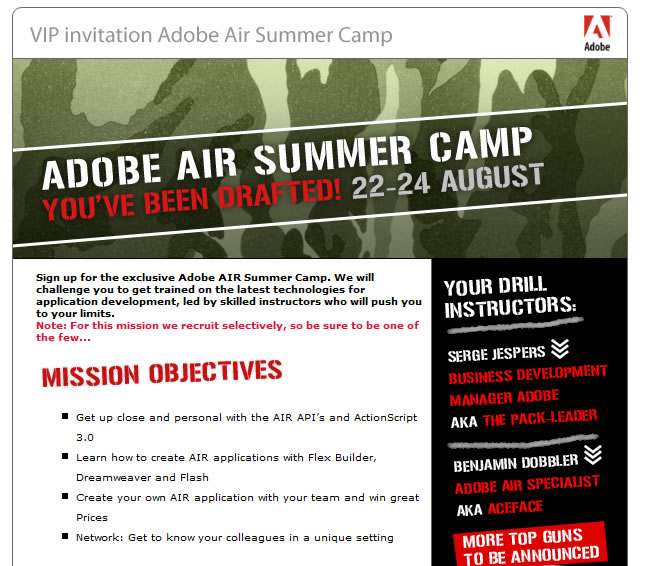 Ok it took a while to work on this but here is part two of my unfinished series “Working With Bits And Bytes In AIR”
I think the formatting (couldn`t get the tabs right in the html) is much better in the PDF and it also contains the first part so i would suggest downloading this if you really want to read it 😉
I`m still making improvements and open to corrections and critics on the stuff i`ve already published as i want this to become valuable so don`t hasitate to write me a mail: benz (@) richapps (dot) de
Download PDF (contains Part1 and Part 2)

I will now only briefly go over the different kinds of bitwise operators and concentrate more on those that are especially useful to extract data from packed words. Even if this stuff may first seem to be boring you`ll at the latest realize the power when we dive into the hands on part and start analyzing an mp3. So if you fall asleep during the next pages you can skip them and refer to them later 😉

The sign for the bitwise NOT operation is the ~. The bitwise NOT simply flips the values of the Bits of a word. So all Bits with a value of 0 will become 1 and all 1`s become 0.
Example:
~1011 0110 = 01001001
This is maybe the easiest bitwise operation and in my short live of playing with bits I haven`t found a use case for it (Which does not mean there isn`t one).

The sign of the bitwise AND is the & Operator. If you have some programming experience you might know the logical AND which uses the sign &&. The AND Operator is extremely usefull if we`re later going to analyze packed words. It helps to extract Bits and to test if certain Bits are set. But for now we`re just going to learn how AND works. The basic rule for bitwise AND operations is that everything times zero is zero. Sounds familiar? Yes it`s the same as multiplication in the decimal world. Here are some examples:
0 AND 0 = 0
0 AND 1 = 0
1 AND 0 = 0
1 AND 1 = 1
You see that only if both Bits are set the result will be a set Bit.
Let`s see how an calculation with two Bytes could look like:

If you look at the examples you might already see how you can use the AND operator to test if a certain Bit is set. Let’s take the following byte.

If we want to know if the second least significant Bit is set we perform an AND operation with a byte that has just the bit in question set. If the bit was set we should get a byte with just that bit set and all others should yield 0.

The second byte we used to test is usually called a mask.
Another useful scenario for using the bitwise AND is the so called bit clearing. For all positions in the bit array you want to preserve you use 1 and for every bit to clear you use 0 in your mask.
Just look at this example:

It should be clear now how the bitwise AND works and you can see how these techniques can be useful to analyze individual bits in a bit array (packed words). If not don`t worry we`ll work more with it later.

Let`s check an example of an OR operation with two bytes.

The bitwise XOR results in a set bit if both bits of the operation are different. In difference to the “normal” OR operation two set bits will result in 0. So in contrast to the OR operator the XOR operator says something like this: If one (and only one!) Bit of an OR operation is set the result will be a set bit.
0 XOR 0 = 0
0 XOR 1 = 1
1 XOR 0 = 1
1 XOR 1 = 0

Left Shift operation work in the following way:
(bit array) < < (number of shifts) The sign of the Left-Shift Operator is x << y. The Left-Shift operator does what the name implies it shifts the bits to the left by the number of bits indicated by y. On the right site the bits are filled with zeros and on the left site they are just cut of. Let`s check a simple example to get the idea. 1111 1111 << 3 = 1111 1000

Now you have a basic overview of the some bitwise operations. As with the Left-Shift operator there is also a variant for signed values in Actionscript. It`s sign is >>>.

Working with Bits in Actionscript

We`ve covered a lot of stuff without touching Actionscript at all but that will change soon.
There is one more thing we`ve to look at if we want to deal with bits in actionscript. Let me tell you the truth Actionscript doesn`t speak in binary. Ha that was a shock right. You`ve gone through all this and now I`m telling you it`s not going to be useful in Actionscript. Calm down everything I wanted to say is that you cannot simply enter a binary number into Actionscript it will not understand it. Take this example. We try to set an integer to a binary number like so:

Note: Actionscript uses 32 Bits for an integer that`s why I used such a long bit array.

If I trace this out the result is: 10000001
Flash simply cuts of the leading 0`s until the first digit and than takes the rest as a decimal number. You can better see this if we do this:


So you see it cuts out all leading 0`s and than does a normal decimal addition.

I think it should be clear now how hex numbers work.

But how will this knowledge about hexadecimal numbers help us in dealing with binary numbers. To show this we will try it out with the familiar color values that we usually write as hex numbers. You may have already applied things like bitshifting and masking to color values to extract the different values for the red green and blue channels of the color. If you`re like me you may have used those techniques without thinking about what`s really going on there. With our new knowledge of bitwise operators, binary and hexadecimal numbers we can now take a deeper looks at what`s going on and it also serves as a first basic example for applying these new tools. A color is usually represented as RGB values were each color channel is represented by 8 bits or one byte. So to represent a color we need all in all 24 bits or 3 byte. In hexadecimal this can be represented by six hexadecimal digits. You`l notice something? Yes one hexadecimal digit can represent 4 bits. That`s because the highest value you can express with one hexadecimal digit is 16 and to represent 16 as a binary number you would need 4 bits. Does that make sense? Look at the next figure to get the relationship.

So know let`s apply some bitwise operations to extract the values for each individual color channel (RGB). In order to get the value of the blue color channel we need to somehow get rid of the other values for red and for the green channel. We`ve done this before! Remember bit clearing when we talked about the bitwise AND operator. We`ll use this technique here and create a mask that contains set bits only were our blue channel is encoded, in the least significant 8 bits.

So the decimal value for the blue channel is 14.

I think you can figure out now how you can extract the red channel. Here is the Actionscript code for it:

Now let`s try it the other way around. We are going to create a color hex string from 3 RGB color values. Let`s say we have the decimal values r=178; g=78; b=100. To combine these three values into one single hexadecimal string we first shift the values into the right position (now using a bitwise left shift) and then combine those values using the OR operator.

var blue:int=100; //No need to shift this one as the blue values will be in the least significant bits

Now we combine these values with the OR operator:

We could also write this all in one line like so:

Just to make sure you really understood the OR operator I will write down what happens in binary code. Assuming we have already shifted the values into the right place we would have something like this:

So first we combine Blue with Green

And now the result of Blue | Green with Red:

That`s it. We are now able to create and dissect simple binary words.